A fan zone for Apex Legends 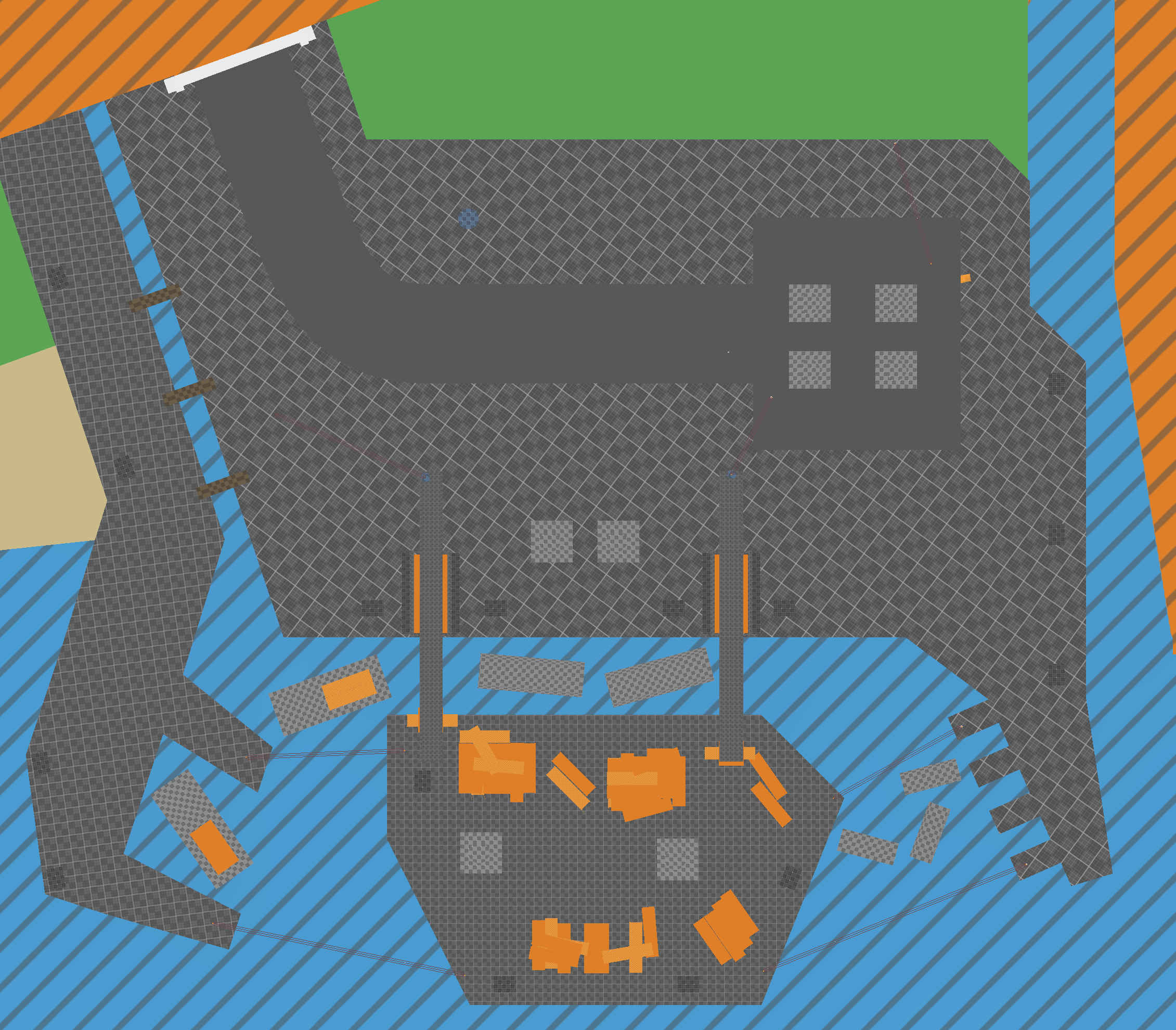 What once was the island's main center of trade for the Apex Games has now become a sea of spoils for those lucky enough to survive the turbulent waters that lead to the shipping yard.

Apex Legends does an amazing job at creating different styles of combat depending on the map area. For this zone, I wanted more of a medium-to-close combat scenario. I took a lot of inspiration from the 'Airbase' zone of King's Canyon. I really enjoy the quick zip line traversals and the many entry/exit points in the zone. However, the zone itself is meant for long to medium combat. I wanted to incorporate many of my favorite aspects of the Airbase into a more close-range combat zone.

Within the space itself, I wanted to try and push players around the main combat space (the container storage island). I had a vision in my head of players circling around and almost swarming to the port isle. I chose to disconnect the container storage area from the mainland to push this idea. Players would have to zipline from one of the edges, climb a crane and jump, or hop across the water on overturned boats. Each route has its advantages and disadvantages: 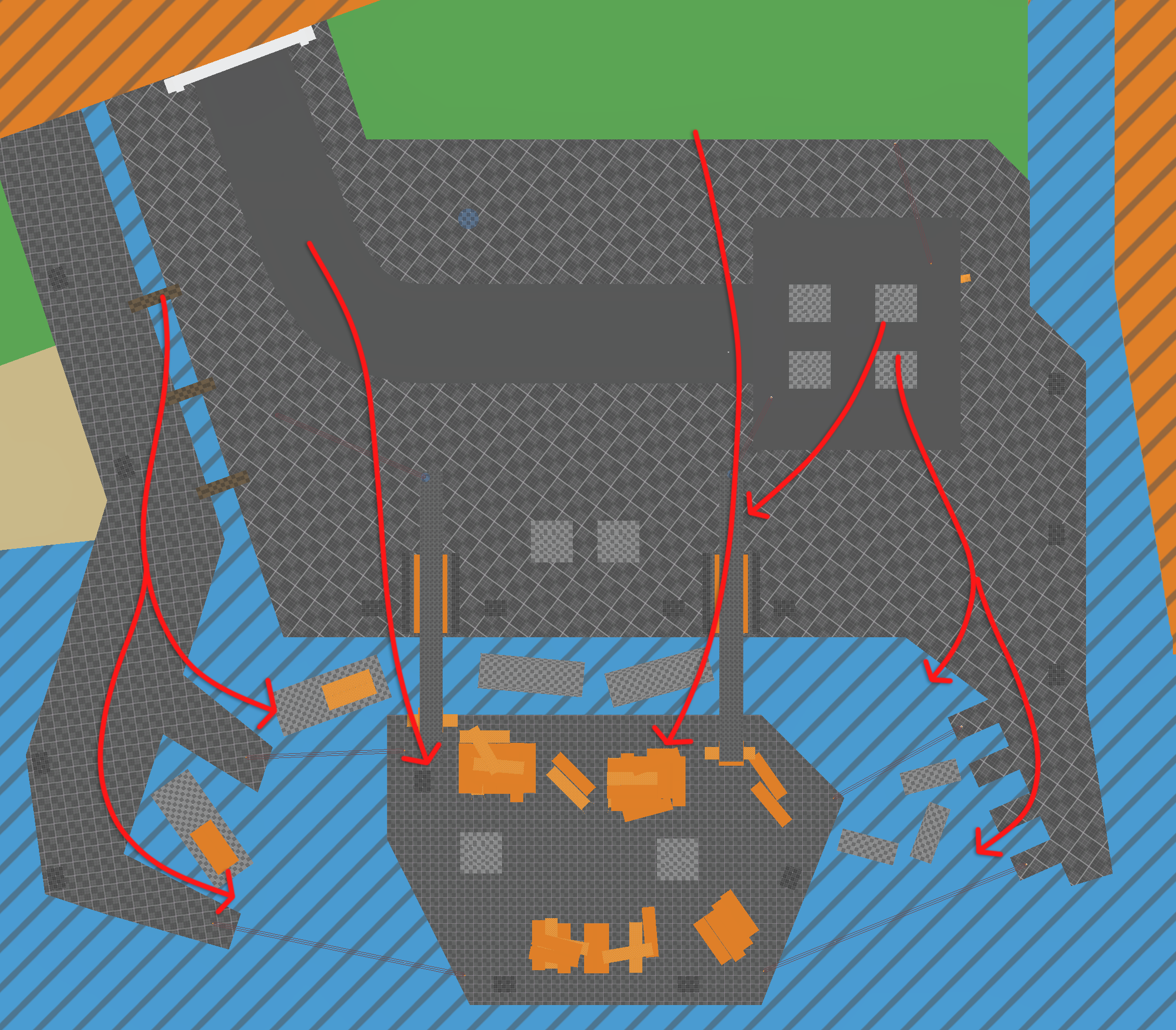 This 'swarm' idea came from looking at various port areas in Google Maps. I really like how these areas stretch towards a certain point, almost like giant fingers. I immediately saw these as lanes to the main combat area and wanted to incorporate them into my level design. Below is an example from Osaka, Japan. While these areas are huge in real life, they heavily inspired the paths to the container storage island where main combat and looting take place.

Apex Legends zones don't exist in isolation. In one area there are usually multiple smaller combat zones around a larger zone. I tried to recreate this with the warehouse, and the area below the cranes. The cranes are surrounded by open space with minimal cover. The expectation was for players to sprint from space to space, getting caught in the open by another team is dangerous, so don't linger. The warehouse, similar to the port island, has various containers, some open, others toppled, and a few that are still closed. These create micro-lanes within the warehouse. I really wanted the warehouse to be a very intense combat space. Players will fight in very close distances, sometimes even face to face. The long shipping containers help to achieve this goal. There is also an "office" area and a catwalk. The catwalk is home to more good loot, but a little more difficult to get to.

The zone has three exits to reach the rest of the battle royale map. The first is to the left side of the map to the beach, next, there's the tunnel through the mountains which hold other interesting combat zone design opportunities not studied in this project. The last is the route between the mountains. I wanted to create multiple ways of reaching/escaping this zone. I designed the space so that combat will be spicy, and I believe having multiple entry/exit ways would allow more teams to reach the zone, and more chances to escape if your team gets ambushed.

Reference from the Port of Baltmore

Thanks for checking out The Docks! It was a lot of fun making this level and spending time with Apex Legends. Hope you enjoyed reading about my design process. I'm always open to critique! Feel free to message me at brucein3d@gmail.com.

Prev
Escape From the Glass Factory
Next
Manitoba